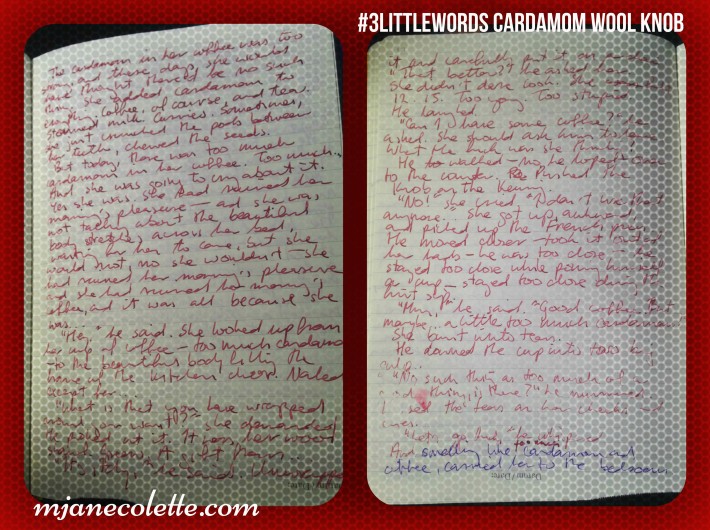 The cardamom in her coffee was too strong, and these days, she would have thought there’d be no such thing. She added cardamom to everything. Coffee, of course, and tea. Steamed milk. Curries. Sometimes, she just crunched the pods between her teeth.

She looked up from her cup of coffee—too much cardamom—to the beautiful body filling the frame of the kitchen door. Naked, except for…

“What is that you have wrapped around your waist?” she demanded.

He poked at it. It was her wool shawl. Green. A gift from…

“It’s itchy,” he said. Unwrapped it and carefully put it on a chair.

“That better?” he asked her. She didn’t dare look. She felt twelve. Maybe fifteen. Too young. Too stupid.

“Can I have some coffee?” he asked. She should ask him to leave. What the fuck was she thinking?

He walked—no, he loped—over to the counter. Pushed the knob on the Keurig.

She got up, awkward, and picked up the French press. He moved closer—took it out of her hands—he was too close—he stayed too close while pouring himself a cup—stayed too close during the first sip.

“Hmm,” he said. “Good coffee. But maybe… a little too much cardamom.”

She burst into tears.

He downed the cup in two big gulps.

“No such thing as too much of a good thing, is there?” he murmured.

Kissed the tears on her cheeks and eyes.

And, smelling like too much cardamom, and coffee, he carried her to the bedroom.

She said: I’m going to give you three words. Ready?

I said: And what do I do with them?

She said: Spin them into a story. A short one. A page, or two.

She said: Only if you want to make things more difficult.

Of course I do.

Send me three new words for next week? Want to?