Interrupting, active listening, smutty reads and chocolate as the solution to all of life’s ills

Me: No. Every time I start to tell you something, you fucking interrupt me just as I’m about to get going and offer me your interpretation-expectation of what you thought I was going to say, or else make the story about you and something that you’ve experienced, so why the hell should I bother?

Him: I thought that was active listening.

Me: No. It’s interrupting. It’s telling me what you think I’m going to say instead of listening to what I’m actually saying. It’s co-opting my story. It’s TALKING, not listening.

Him: Well, now I’m afraid to say anything.

Me: Good. Now don’t say anything… and listen.

There’s this quite fantastic little book for parents of teens called I’d Listen to My Parents If They’d Just Shut Up: What to Say and Not Say When Parenting Teens Today by Anthony Wolf.

I’d rather like to have a version called I’d Talk to My Partner If Only S/he’d Shut Up.

Him: Nice attempt to placate me by slipping in the double-gender pronoun. You’re picking on me.

Me: I don’t have to explain this to my girlfriends.

Him: How about your mother?

Fine. It’s not just a gender thing. But.

Some fun places to check out, my SexyReaders:

Read A Romance Month  — ok, so today’s the last day. That means you have an archive of 93 interviews/encounters with fantastic authors to meander through for the next 11 months until Bobbi Dumas gives us this treat next year. Also connect with Bobbi on Twitter, at @BobbiDumans.

Love Indie Romance — I connected with this enthusiastic bunch of readers and writers on GoodReads last week, and I can’t wait to see where this labour of love takes them. Follow @LoveIndies on Twitter and join the group on GoodReads. 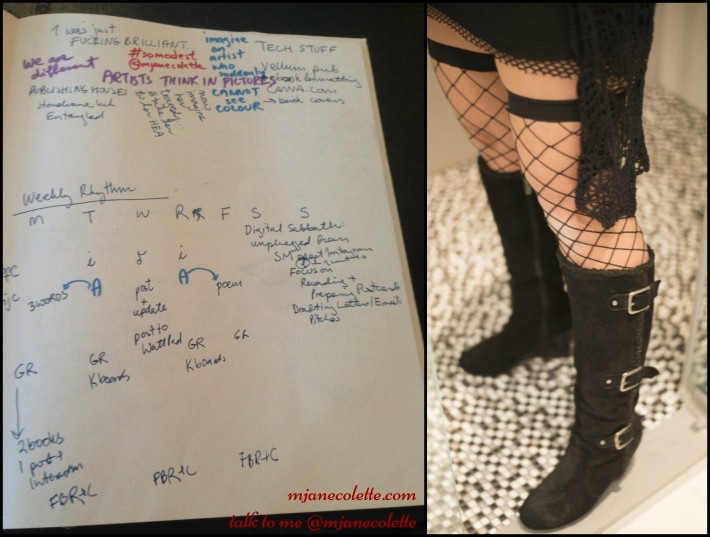 but that’s good. Really. Essential. Part of the plan.

You: What’s with the boots?

Me: I thought my illustrations were getting a little too text-heavy. I wanted to sex things up a bit.

You: Are you saying words are not sexy?

Me: They’re not everything.