So Cherry Pie Cure is a week old today and I’m coming up for post-new release air to whisper a few sweet things into your ear, and to share some beautiful things from around the web (all about me) (because I just released a new book) (hey, I get to brag!). 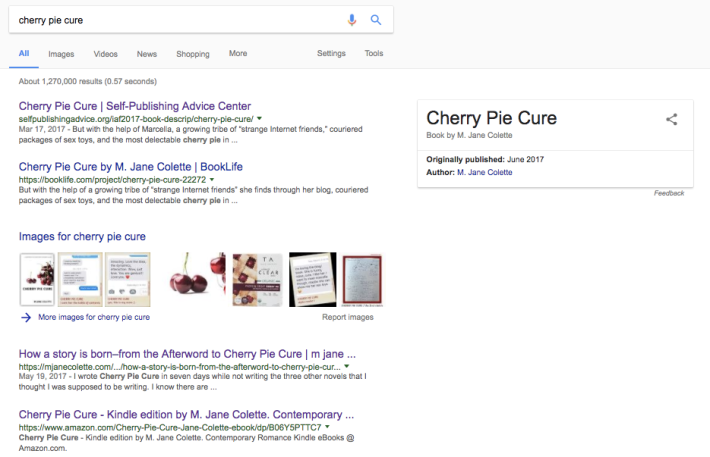 Google Search Page 1: I dunno what that first link is, but hey, they got the cover and name and ISBNs right, so it’s all good!

Actually, let’s switch the bragging mood to a grateful one—it’s been a crazy, intense few weeks (months) in my life-head-world, and I am so very, very grateful to the folks who’ve helped spread the word about this unexpected “where did it come from” new release.

Let’s start with my friends at the Alberta Romance Writers Association, who gave me some nice ink pre-release day when life derailed me from being present and doing some of the stuff I needed to be doing: Cherry Pie Cure by MJ Colette launching on June 15 Thanks, Bret, Tammy et al. xoxo

Big thank you to Lexxie at (un)Conventional Book Reviews—a gem of a creature I met at RT (that’s what all those lines are for)—organized this fabulous Giveaway & Blitz on her fabulous blog: Giveaway Blitz Cherry Pie Cure by M. Jane Colette

Another big thank you to Brandie at Bookworm Brandie for her new release blitz (and all the retweets—OMG, woman, you have an army!!): New Release Blitz ~ Cherry Pie Cure ~ M Jane Colette @mjanecolette (I met Brandie in the same line-up that I met Lexxie. From now on, I’m choosing the longest line-up at the grocery store, btw. You never know what will happen in it.) (Um, unless a cashier like Reza from Cherry Pie Cure is manning a station. Then I’m going in his line. You know you are too.)

While I’m thanking the souls I met at RT: a suitcase full of thank-yous to LaSheera Lee of the Read You Later radio show (empire?) for all the Twitter and Facebook love. You can find LaSheera on Facebook or Twitter as readyoulater—and let me tell you, she throws the best parties.

A beyond, beyond thank you to fantasy/MM author Michele Fogal for this fantastic profile: Casual Queerness, Stealth Diversity and Cherry Pie: M Jane Colette on writing the world we want to live in  (Michele and I met at the Surrey International Writers Conference in 2016 at a party put on by the RWA-GVC. There was wine. Michele’s newest book is possibly the most unique book I have ever read: it’s called Root of The Spark, and it… well, it totally reimagines the world. Check it out.)

Smooches to the Fly Girls at Wicked Cool Flight for this chance to ponder on whether I really am I romance author* and why I write the types of women I write: Meet M Jane Colette: She’s Just Released Cherry Pie Cure.  The Fly Girls, who include author Teresa Crumpton  and I did not meet at RT, although we were all there—but we’re connected now. 🙂 See you in Reno in 2018, lovely ladies!

I don’t have an adjective for this thank you for Jenn of Jenn’s Book Obsession: Release Blitz Cherry Pie Cure by M. Jane Colette. Jenn’s had a hell of a ride the last few years (you can read about it here: Where have I been the last two years?) and I stumbled on her post, announcing what she’s been through and that she wanted to get back into book blogging NOW. I reached out to her mostly to say, “OMG, woman, you are amazing and hugs!” Considering what she has on her plate, I am so grateful for her taking the time to grab the Cherry Pie Cure stuff and turn it around so quickly, and promo it both on her blog and Facebook Page (which is fabulous, check it out: Jenn’s Book Obsession.)

Enormous, larger-than-the-universe thank yous to Nicole of Reads2Love for this: Cherry Pie Cure by M. Jane Colette #ReleaseDay @mjanecolette #asmsg. Nicole and I “met” through Twitter. She followed me—I checked out her blog and loved it, especially its focus on audiobooks (because, Consequences is in audio-production!). I reached out to laud her and tell her what I was up, and in the process entered a pretty great audiobook giveaway (I haven’t found out if I’ve won yet: you still have a few days to enter, btw, and you can win so many audiobooks!!: Audio Delight.

And one more thank you, which happened through the generosity of Nicole from Reads2Love. Are you ready? I’m gonna show you the screen shot… right… now:

(You see me? You see who’s next to me? And above me?) And you can see the whole thing here if you like: OMFG I’m almost touching Nalini Singh! Best Thing EVER on FB

Also, full of gratitude and appreciation for my CaRWA (Calgary Chapter of the Romance Writers Association of America) peeps for their support in the lead-up to the publication of Cherry Pie, especially Jill Flanagan for answering my many stupid questions, Shelley Kassian for the most amazing social media share of launch day—ok, I totally have to show you a picture of it: 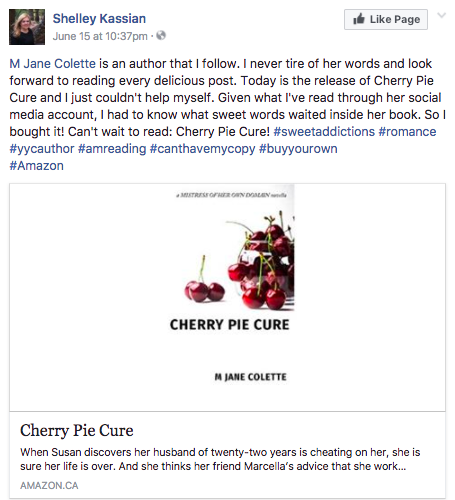 (Shelley Kassian’s latest book, A Sacrifice for Love looks absolutely delicious, btw), A. M. Westerling for all the shares and retweets (she’s running a GoodReads giveaway for her latest book, Barkerville Beginnings, check it out), Jenna Howard for you know what (check out what Jenna’s up to on her Amazon page), Jan O’Hara for that first thing and letting me know about that other thing ;P(Jan’s releasing a novella on August 1 in the Tropical Tryst Series–great summer reading, I bet!), and all the rest of you for creating a fertile, creative, supportive community.

I probably have a hundred more thank yous. I’ll end with just a few more, ok? Cameron Allie, whom I met at a Passionate Ink workshop almost a year ago, was way ahead of the curve of me on how to do this e-launch thing, and I’ve learned so much from watching her. And, she showed me that interviews where I was on the other side of the Q&A weren’t so scary when she did an Author Spotlight on me back in April.  Cameron is running a really cool contest right now on her Facebook Page that’s all about Canadian trivia (she’s Canadian too, eh) and it looks like so much. Contest details are here on her blog  and you can find her on Facebook (you’re still logged in, ya?) here.

More thank yous to the rest of the Passionate Ink gang (the chapter of the Romance Writers of America that likes it dir… I mean, hot) —especially Diana Sobolewski, to whom I introduced you a while ago in Would you like some wine with that?—who has been amazing supportive on social media and also in educating me about what wines go best with cherry pie (research is SO HARD ;P)—and the writers and readers at Seasoned Romance, who are a) living Gloria Steinmen’s maxim that “women get more radical with age” and b) know love (and sex) gets better (more radical, too? maybe?) with age. Especially for women. As they hit their… you know.

Closer to home: a thank you to my family for making me a gluten-free cherry pie for breakfast on launch day and to my two-woman street team on this launch for doing the work of two dozen.

My lovelies. You are all so sweet. Thank you.

If I baked as well as Susan, you’d each have a cherry pie on your doorstep tomorrow, via Fedex.

As it is, my cyber-hugs and Internet kisses must suffice.

PS Did I mention that I won google? ;P

Google, Page 2–and you know what that Pinterest link is? The board my girl made for me of Cherry Pie recipes that //could// be Susan’s magic pie. 🙂