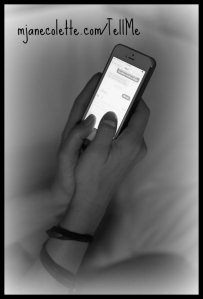 We’re still SFW this week. Day 1 continues. Do you remember where we left off last week? Like this:

// Maybe. Never was a word so full of potential.//

Today, Jane finds out Matt’s coming to town, and chooses danger. And you meet Nicola and her rat-fuck bastard almost-ex-husband…

There’s a new message. From him.

The air around me vibrates and it has nothing to do with the speed at which my heart is beating. My pulse is not elevated and my breathing is not changed. Yes, I’m smiling. Fuck that, of course I am. Old friend. Oldest of friends. It’s been years. Pleasurable anticipation.

I lift my eyes away from the face of the phone briefly, and realize that the mood of the conversation has now changed. Its topic is no longer kids, teachers, enrichment programmes, and who’s reading what or buying what for whom. It is now Nicola’s rat-fuck bastard of a husband and their gong-show of a divorce. Or is it still a separation? Nicola’s talking in a slightly hysterical voice about their current fight over the line of credit, what to do with the mortgage, and his lack of cooperation on the co-parenting plan. “Step one is taking the Parenting After Divorce Seminar, how hard is it to just take a weekend and do it, god knows he doesn’t take the kids every weekend!” she wails. Colleen, her own gong-show of a divorce story almost four years old now, is leading the offers of unconditional support. Everyone else is murmuring in assent, saying, “What an asshat,” or “Rat-fuck bastard” every once in a while.

I take a moment to be, once again, astounded that Nicola’s rat-fuck bastard of a husband managed to be, first, attractive to Nicola, and then, attractive enough to his mildly skanky intern to get pursued, seduced, played. Proof there’s someone out there for everyone.

And I turn back to the phone. And type.

// —Breaking news indeed. Message me when your schedule nails down. Coffee? Wine? Jagermeister? //

There. Friendly, but not eager.

My pulse has not quickened. My lips are curling into that stupid smile, but that’s what he’s always done to me. But. There’s nothing wrong with smiling.

I don’t have to respond. I look up from the phone at the women around me. “So there we are, on our first family holiday in two years, we’re about to go to Disneyland, fucking Disneyland! And he’s in the bathroom, sexting with the girlfriend!” Nicola’s voice rises. “Sending her pictures of his erect cock, for fuck’s sake!”

“What a bastard,” Colleen says and shakes her head. The voices of the others rumble in the background, a continuing Greek chorus of indignation and support.

I’m perverse. And I’ve heard this story about six times in the last month.

I text Matt back immediately.

// —Nice. I have almost two weeks to work up some level of resistance to Jager. Where? Are we bringing our significant others, or living dangerously?

I let the lips do as they will. Type a smiley face. Delete it. Disclose the deletion. Type:

I should stop typing. Engaging. Turn off the fucking phone. Instead:

// —I can’t find the right one. Jesus. How many years has it been? I hope we won’t be disappointed.

You couldn’t disappoint me if you tried.

I very much look forward to it. //

I wish this was the kind of phone you could snap shut. That’s what I want to do: I want to terminate the conversation with Matt, because where he draws me, where he’s always drawn me, I am reluctant to go. Reluctant sometimes, anyway. Reluctant for the past 10 years, and still, reluctant now, today, at this precise moment.

I turn off the phone—not nearly as satisfying as the sound made by clicking it shut would be—and turn my attention to the continued crucifixion of Nicola’s rat-fuck bastard of a husband and his clichéd affair, conducted primarily via texts on an un-password-protected phone he’d just leave lying around the house. “Who does that? How does a man with a fucking Master’s degree from MIT do that?” Nicola asks, and I’m uncertain if she’s talking about the carelessness or the betrayal. “At least it was easy to track, and you found out about it as quickly as you did,” Colleen counsels her. “My ex was screwing around on me for years.”

Marie looks at me and taps her phone. She starts texting.

Fine. He’ll be gone by now anyway. I turn the phone back on. Marie’s text is short and to the point. “OMFG pls tell me you this bores you as much as it does me.” I look at her and bite my lips.

// Did you find the emoticon that captures your feelings? //

// —No. Maybe there isn’t one. I’ll have to express my emotions live.

Or we could go old school. Use adjectives. I’ll start. //

NEXT WEEK: (N-entirely-SFW) Words are dangerous: From hopeful to hard in three adjectives

TOMORROW: Confession 3: You tell me the title really sucks