HOLIDAY Filthy Friday Feature aka Jane has Christmas issues and solves them with orgasms episode 2019-9! You know how I told you Will is my favourite hero? This scene tells you why. 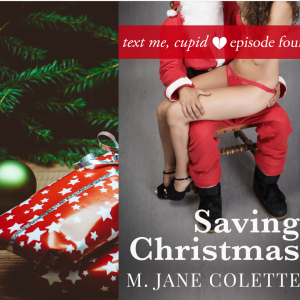 “HAPPY ANNIVERSARY,”
from SAVING CHRISTMAS
episode one of TEXT ME, CUPID
BY M. JANE COLETTE

“But fuck,” he said, after a deep dive into her mouth, “you were so annoying that night. Why on earth did I persevere?”

“I am outrageously cute,” she said. Started unbuttoning his shirt.

She didn’t tell him she ate. But she went back to the buttons.

“Will they burn?” she asked, kissing her way across his chest, then down.

“Probably,” he said as she undid his pants. Zipper.

Christ. She loved his cock. It wasn’t funny looking. At all.

Well, except when it was soft. But it didn’t take much… she nuzzled it with her nose… to change that.

“Probably not very much,” he said as she flicked a tongue over the head.

“Ah fuck, I like things crispy,” he said as she worked her way down the shaft and he dropped his hands to her head.

She slid her mouth up and down it, delighting in his pleasure. And feeling her power. His hands held her head steady and then… impaled and gagged her.

She struggled. He pulled her, cock in her mouth and into her throat, on her knees into the kitchen.

“But not that crispy,” he mumbled. “Don’t come off. Stay right there… This is going to be awkward…”

It was. But Will opened the oven door and slid out the baking tray without burning either her or himself, and Florence found out it was possible to burst into laughter with a cock in your mouth.

“That did kill the mood a little,” he reprimanded her after she stopped laughing and he went limp.

“You did want to eat,” she said. Climbed into his lap as he sat at the dining room table she no longer loathed.

“I did,” he said and lifted her off his lap onto the table.

“Happy anniversary of the worst-best one night stand of my life,” she murmured somewhere between orgasm three and four.

“Thank you,” she said, caressing his hair.

“Say, ‘I love you,’” he said. “Although, parenthetically, it would be great to hear you say it first. Unprompted. Sometime.”

“I love you,” she said. “Although, parenthetically, it would be great if you, you know, didn’t keep on asking… Ow!” He bit her thigh. “Why?”

“For being mouthy,” he said. “And gorgeous. And fucking delicious. And not letting me eat the incredibly impressive, almost gourmet dinner I prepared. Have I told you how hungry I am?”

“Eat,” she invited, spreading her legs.

“Greedy bitch,” he said, dragging a tongue along her slit. “I am temporarily full of that. And you interrupted my stream of thought… which was leading to…” He stood up abruptly and pulled her off the table and onto his lap. “Your OKC profile.”

Florence stiffened. Also, and she found this fascinating, dried up—not just inside, but the juices that had just been trickling down her legs, disappeared. Or so it felt.

“No?” Will turned his head. And now she felt him go stiff. His spine, not his penis.

“No,” she said and kissed him. “Tonight is the anniversary of our first one night stand. And we are going to eat…” she looked at the tray full of tarts… “what did you make?”

“It’s this quiche-soufflé hybrid,” he said. “Which, ungrateful woman, took me hours to find on the Internet.”

“Don’t call me ungrateful—I am nothing but awed—I am awe, how do you like to put it, I am awe incarnate. And don’t interrupt. We are going to eat your soufflés—I can’t believe you made that, by the way, Will, you are amazing. And we are going to fuck. And at some point, we’re going to ride up and down the elevator half-naked until we see Mrs. Z. And we will fuck some more. And maybe have a shower or jacuzzi and flood your bathroom. And… let’s see… did you buy the rope?”

“If I tie you up, you don’t get sex,” he muttered into her hair.

“If I don’t get sex, you don’t get sex,” she muttered into his neck. “Point: we are going to have a fucking fantabulous night. And we can fight in the morning.”

“Are we going to fight about it?” he asked.

Florence looked at him. Then pulled off her dress.

It turned out that Will did indeed know many things about knots.

Saving Christmas is the last episode of Text Me, Cupid. All four episodes are available now in one fabulous print, digital, and audio edition, so if you enjoyed meeting Will and Florence and want more of them, this is the version you want. 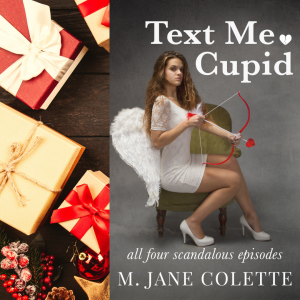 Holiday stress has never been this hot

Meet Florence: I’ve done this before, looking for a partner or soul mate or someone-to-grow-to-love, and you know what? I’m done with that. Honestly. I’m just looking for some casual sex.  All I’m interested in is a one night stand, or several—not all of them with you. Just making it clear that I’m interested in playing with multiple partners. I don’t want to get attached and I don’t want you to get attached.

Meet Will: I’m reeling from a recent divorce and incapable of having a meaningful relationship, possibly even a meaningful conversation. The only upside to my situation is that after fifteen years of monogamy I get to chase all the strange I want.

He’s freshly divorced and in denial. She’s twice-burnt and prickly. They’re a terrible idea. They know this. But every time their eyes meet, their clothes come off.

Still—they’re not going to fall in love. They are not.

Not even if this one night stand has 365 days.

AVAILABLE ALL THE USUAL PLACES
+you can search for buy links at mjanecolette.com/books

I SUPPORT INDIE BOOKSTORES! IF YOU’VE GOT ONE IN YOUR CITY AND TOWN,
KEEP IT ALIVE BY BUYING FROM THEM!

Indie bookstores can order any book in for you.